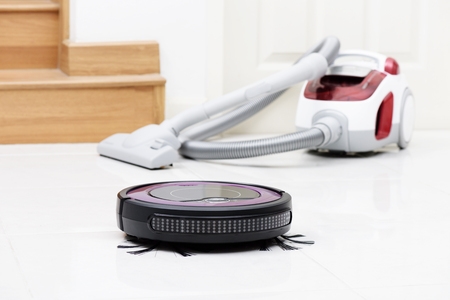 Until very recently, the concept of domestic robots belonged to the realm of science fiction. While the actual implementation of robotic technology is nothing like the human-like androids in science fiction movies, our present-day domestic robots do possess a great deal of intelligence and have taken over household tasks that we previously had to do manually. Of all the robotic technology used today, robot vacuum cleaners must be the most used and have had the biggest practical impact on our daily lives.

The story of the robot vacuum cleaner becoming a reality began in 1996. The concept and design of the world’s first autonomous vacuum cleaner or robotic vacuum was the brainchild of the inventor James Dizon. The well-known Swedish appliance manufacturer, Electrolux, was the first to realize the potential of this new and exciting concept. The company purchased the invention from Dizon. This led to the world’s first fully functioning robot vacuum cleaner – the Trilobite. Although this machine caused a slight sensation on television, appearing in Tomorrow’s World (a science program produced by the BBC), it didn’t make any real impression on the consumer.

When the Robot Vacuums Started to Become Popular

iRobot and the Roomba

The next big step in robotic technology and vacuum cleaners came from Britain when Dyson built the DC06. Because of its high cost, this model never made it to the marketplace and robot vacuum cleaners seemed, at this time, to be a distant reality for the modern home. Though it wasn’t going to be a long wait for the world’s first commercially viable robotic vacuum cleaner. In 2002, the US company iRobot changed the face of home robotic technology with the introduction of the Roomba. From this point onwards the Roomba name has become synonymous with robotic vacuum cleaner development. Initially, the company planned on producing 15000 units to test the market, with plans for another 10000, if the product proved to be a success. However, by the end of that year, the popularity of the iRobot Roomba proved to be so massive that 50000 units were produced. 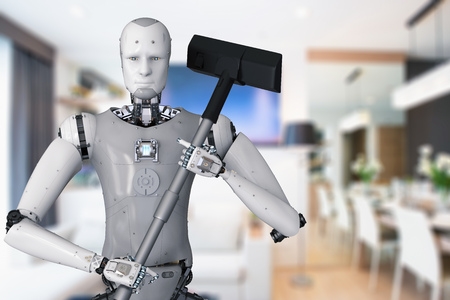 These early robot vacuum cleaners were rather crude beasts that relied mostly on the operator using a remote control to guide the device. Although the first robot vacuum cleaners had an autonomous mode which allowed them to clean unassisted, they were not very effective. These robotic vacuum cleaners had rudimentary navigation and would bump into obstacles and were often unable to recover from this, coming to a standstill. They also used a random path that made them very inefficient, cleaning the same area repeatedly whilst missing others. These factors, in combination with batteries that had a very short working time, meant that robotic vacuum cleaners couldn’t compete outright with the traditional vacuum cleaner market. They had, however, proven themselves to be a popular invention and this meant that companies were now spending generously on robotic research and development.

The next major breakthrough in robot vacuum cleaner technology came from Dyson, in 2014. The company produced a robot vacuum cleaner with a 360-degree camera mounted on the top of the machine. This was intended to improve the robot’s navigational ability, this model was also reputed to have much more suction power than any of the previous robotic vacuum cleaners. Since then all manufacturers have worked at improving the intelligence of their robots. Other breakthroughs include improved batteries and the use of smartphone technology to provide the user with a greater amount control and versatility in using the robot.