Breaking News! There have been numerous reports by people who claim to have seen Darth Vader and his Storm Troopers here on earth. While many fear that we are now the target of the Galactic Empire and that life as we know it will never be the same, Star Wars fans are said to be very excited by recent events.

Upon further investigation, it appears that all the commotion is actually as a result of the launch of the new Darth Vader and Storm Trooper Star Wars robot vacuum cleaners by Samsung. Based on the popular PowerBot VR7000, these robot vacuum cleaners are the latest Star Wars novelty item to be made available. Samsung has released these innovative machines to celebrate the release of the final chapter in the Star Wars series “Star Wars: The Last Jedi”

The design of the new PowerBot is aimed at capturing the hearts of Star Wars fans around the world. This is a fine example of engineering meets art. Both models in the range bear the face of the iconic Star Wars characters after whom they have been named. The range-topping Darth Vader model, in glossy black, is a true resemblance to the Darth Vader mask. There’s a white Storm Trooper model which bears the mask of these inter-galactic fighters. Both models have audio effects which include music from the Star Wars soundtrack and voice clips of actual phrases used by these characters in the Star Wars films. 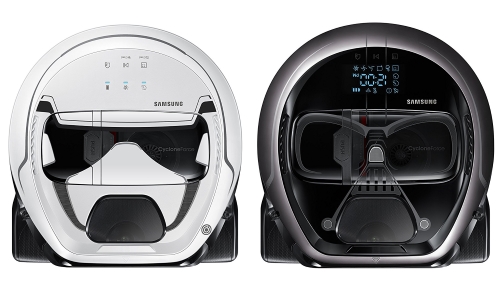 The Samsung VR7000 has already earned its stripes as a superior robot vacuum. The cyclonic suction power is amongst the best of any robotic vacuum cleaner and its smart navigation system is equally matched to rival any of the top models from other brands. These robotic vacuums have excellent sensors that scan the room and calculate the most efficient way to clean every part of the home. In the Darth Vader guise, the PowerBot also comes with Wi-Fi connectivity for use with a smartphone or tablet. This system is compatible with Amazon Alexa, so you’ll have the rare opportunity to speak directly to Darth Vader himself. Except in this instance, you get to be the boss of the commander of the Galactic Empire, not the other way around. There’s no doubt that the force is with the PowerBot Darth Vader and Strom trooper robotic vacuums.

With Christmas around the corner, there can’t be a better gift for the Star Wars fan who wants more than just a robotic vacuum cleaner to make their life easier. This is a novel gift idea, appealing both to a sense of fun and the practicality of owning one of the best robotic vacuum cleaners on the market. In time, these machines will probably become collectors’ items as with most limited edition Star Wars paraphernalia. For all you know, your Samsung PowerBot Star Wars vacuum may one of your best investments.

I’m very pleased to confirm that we are not being invaded by the dark forces of the Galactic Empire. Thanks to Samsung, this is just a fun way to make home cleaning less of a chore and more of an amusement.